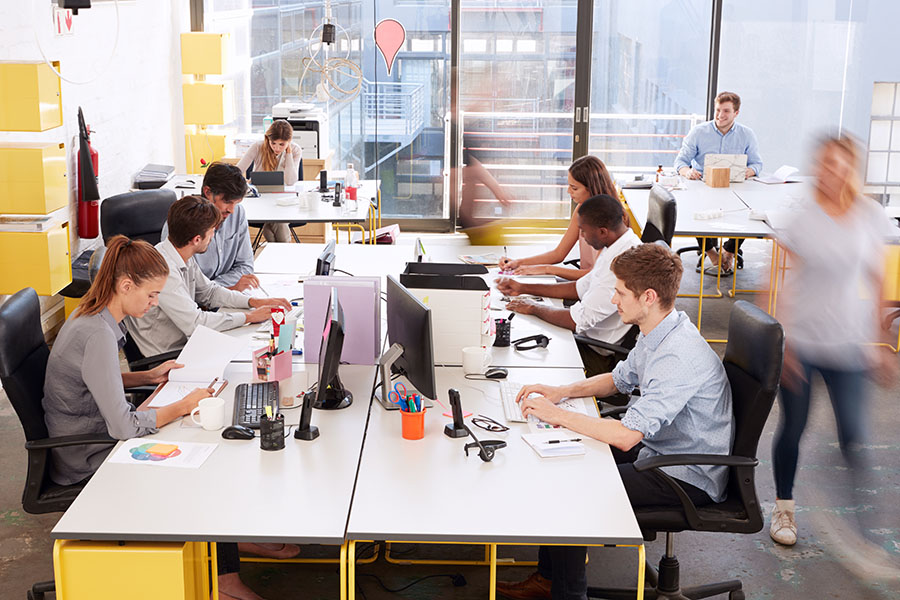 Periodically there are articles heralding the end of the open floor plan office, and yet the end doesn’t fully arrive. Image: Shutterstock

Oscar Wilde is said to have quipped that “God, in creating man, somewhat overestimated his ability.” Our species is capable of folly on a grand scale. Exhibit 4,000 in this litany of woe is the continued existence of open plan workplaces.For decades, research has found that open plan offices are bad for companies, bad for workers, bad for health and bad for morale. And yet they just won’t die. Human beings, if they are to thrive, need a bit of privacy — walls and a door. And yet employers, decade after decade, neglect to give workers what they need, refuse to do what’s in their own self-interest.
The ideology of open plan workplaces associates walls and rooms with authoritarianism, hierarchy and social isolation. If you put people together in one big room, or in low cubicles, the popular thinking goes, they will collaborate, a spirit of egalitarian togetherness will reign.This high-minded theory nicely dovetails with the somewhat less idealistic logic of cost per square foot. If you jam a lot of people into a crowded space with no separations, you can squeeze in more employees at lower cost.The first problem is that open floor plans don’t foster more face-to-face collaboration, they foster less. People can take only so much social interaction. If you shove them together cheek by jowl they will just put on headphones and burrow into themselves. A much-cited study by Ethan Bernstein and Stephen Turban found that when companies made the move to more open plan offices, workers had about 70% fewer face-to-face interactions, while email and instant messaging use rose.Another study of open office workers in major U.S. cities found that 31% held back their sincere thoughts on phone calls because they didn’t want their co-workers to overhear them.It turns out that if you take out physical walls, people will create norms that discourage communication, what Bernstein and Ben Waber call a “fourth wall.” As they wrote in Harvard Business Review, “If someone starts a conversation and a colleague shoots him a look of annoyance, he won’t do it again. Especially in open spaces, fourth-wall norms spread quickly.”Also read: Amazon workers who won a union their way are inspiring change in labour movements
The second problem is that open floor plans hurt morale and productivity. In 1997, some employees in an oil and gas company in western Canada switched to an open plan design. Six months later psychologists found the employees reported being worse off across the board — stressed, dissatisfied, less productive.In 2011 psychologist Matthew Davis and others reviewed more than 100 studies about office environments. A few years later Maria Konnikova reported on what he found in The New Yorker — that the open space plans “were damaging to the workers’ attention spans, productivity, creative thinking and satisfaction. Compared with standard offices, employees experienced more uncontrolled interactions, higher levels of stress, and lower levels of concentration and motivation.”A 2020 study by Helena Jahncke and David Hallman found that employees in quieter one-person cell offices performed 14% better than employees in open plan offices on a cognitive task.The third problem with open space floor plans is they are bad for the health of employees. It should be obvious that people have trouble concentrating and maintaining a calm demeanor when they are bombarded with noise.A study led by Elizabeth Sander found that open plan office noise increased negative mood by 25% and sweat response by 34%. A study published in The Scandinavian Journal of Work, Environment and Health found that compared to people in cellular one-person offices, people who work in two-person offices had 50% more days of sickness absence and people who work in open-plan offices had 62% more days of sickness absence.A lot of the evidence I’m citing here is not new. It has been around for years. And it confirms the rhythms of human creativity that have been observed for centuries. To do creative work, most people need periods of solitude when they are gestating their ideas, then they need periods of sociability when they are testing their ideas and then they need more periods of solitude when they are refining their ideas.Also read: Flexibility, skills, entrepreneurship will shape labour market in 2022: LinkedIn India head
And yet this ancient wisdom and the more recent flood of evidence has had limited influence on how many companies actually design their offices. Periodically there are articles heralding the end of the open floor plan office, and yet the end doesn’t fully arrive. Fortune reports that post-pandemic many companies are increasing the number of conference rooms and decreasing the number of individually assigned desks — which could make the privacy problem worse.

It could be that short-term budget considerations trump a firm’s long-term self-interest. It could be that Taylorism never really dies. Managers want the illusion that they can see and control their employees, allegedly to maximize efficiency. It could be that the ideology of transparency never dies either, the false assumption that if we make all organizations see-through we will increase trust. It could also be that there’s a power dynamic at play. If people have their own offices, they get to control what they are like, not the employer.

Either way, this suboptimal workplace lives on, another sign, as Oscar Wilde would no doubt observe, of human folly.