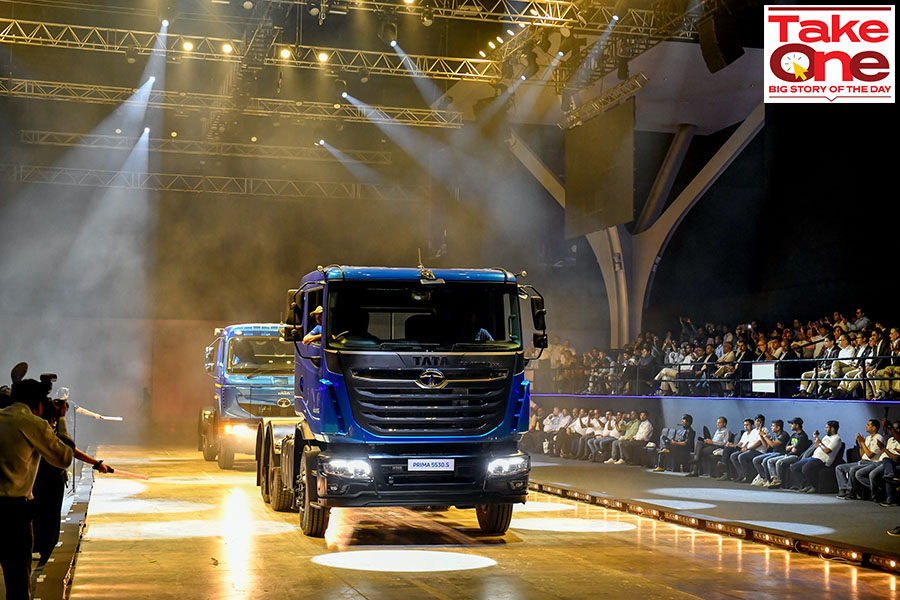 About a decade ago, Tata Motors cornered around 55 percent of the commercial vehicle segment, a number which has since fallen to about 45 percent and Tata reckons that a focus on profitable growth will also play a significant role in winning back the market

For a few years now, Tata Motors has made a habit of reinventing itself. Its passenger cars have shed its reputation as a fleet taxi operator and instead turned to offering chic models featuring advanced safety features, helping the carmaker emerge as the country’s third largest carmaker. Then, even as it transitioned into a force to reckon with, the makers of the Jaguar Land Rower also embraced electric transformation rather early on, and now corner a little over 80 percent of India’s electric vehicle market.

Last year, the company turned its electric vehicle arm into India’s most valuable electric vehicle company with a valuation of $9.1 billion, until Mahindra too stepped into the game with a similar valuation for an EV arm. All that’s probably why, in a two-year period, between March 2020 and September 2022, the market capitalisation of Tata Motors grew six-fold from nearly Rs23,000 crore in March 2020 to over Rs151,000 crore in September this year.

Now, as it cements its role in India’s passenger vehicle ecosystem, the automaker is also busy looking to turn over a new leaf in its commercial vehicle division, where it has seen its market share decline by some 10 percent in a decade. In early September, the automaker launched a slew of trucks with features often found in some premium cars in the country including Advanced Driver Assistance System (ADAS), Driver Monitoring System (DMS), Electronic Stability Control (ESC), Tyre Pressure Monitoring System and the country’s first CNG [Compressed Natural Gas] powered medium and heavy commercial vehicle.

“The way it appears is that the price differential between CNG and diesel will remain, which means that CNG will always have that total cost of ownership benefit,” Girish Wagh, executive director at Tata Motors says. “The second, issue, which comes in the mind, is range anxiety and we addressed that by giving a higher range. We have variants from 500 kilometres to 1000 kilometres range.”

The recent launches largely revolve around Tata’s firm belief that safety and alternative fuel will be imperative to drive commercial vehicle sales at a time when infrastructure spending in the country could see an upswing. Already, a spurt in the construction activities along with high fleet utilisation levels, and consistent fuel prices, had helped push sales of commercial vehicles in the past year, leading to a 46 percent growth in sales according to the consultancy firm, S&P Global.

Also read: Tata Motors is on a roll. Can anything stop it?

“Last year, we had studied some of the emerging themes at the national level,” Wagh says. “Of course, infrastructure growth continues. Overall road safety was coming up as a trend. Alternate fuel seemed to be growing in terms of penetration till recently when the price arbitrage with diesel dropped. In addition to this, due to the fuel price inflation, the need for increasing fuel economy and helping the customers with the total cost of ownership became more important. So we took these four themes and decided to launch a range that will address these themes.”

“Going forward, technology will play a significant role in commercial transportation, especially with new regulations coming in and in improving efficiency of transportation,” Puneet Gupta, director for automotive forecasting at market research firm S&P Global Mobility says. “With an increased focus towards technology, and alternatively towards greener fuels, Tatas are aligning themselves with the vision of the government which will go a long way in improving sales, and consequently their market share.”

The decision to focus on alternative fuels such as CNG and LNG [Liquefied Natural Gas] is in line with a global trend to move away from conventional fossil fuels. In addition, with rising fuel costs, truck owners are expected to look at ways to reduce their fuel bills. India’s import of crude oil required for vehicular fuel has also been significantly increasing over the years. It stood at $40 billion in 2017 and is projected to more than double to $90 billion by 2030 at the current pace.

But a transition to electric vehicles in the segment, in line with the passenger vehicles, is only expected to go through natural gas or alternate fuel, Wagh reckons. It also helped that gas distributors were stepping up refuelling facilities for CNG. Already, India’s largest carmaker, Maruti Suzuki, and Tata Motors, have been offering CNG for passenger vehicles which means that outlets across the country could see significant growth even as customers increasingly embrace the greener option.

“If you look at China, for example, the migration from diesel to electrification seems to be happening through natural gas,” Wagh tells Forbes India. “Looking at what the government is trying to do here, we want to be prepared for CNG and actually give offerings that will help the customers in their business.”

The company already offers CNG in I&LCV (intermediate and light commercial vehicle) and SCV (small commercial vehicle). Already some of Tata’s rivals have laid out plans to focus on alternate fuels including homegrown manufacturers such as Ashok Leyland, and Pune-based Blue Energy Motors. Tata Motors’ passenger vehicle division too, meanwhile has also emerged as the country’s front runner when it comes to battery-operated electric vehicles which gives the group enough wherewithal to transition its heavy vehicles.

“Electric vehicles will certainly make sense in some specific applications, on predictable routes, closed loops, or lower range, where you can come back to the charging location,” Wagh says. “Longer-range battery electric vehicles will have limitations because if you want to increase range, you need more batteries. More batteries mean the weight increases and the payload goes down. Hence, hydrogen ICE or fuel cell may become attractive. So in those specific applications like buses and SCVs and even in some light commercial vehicles, battery electric vehicles will have good penetration.”

Already, Tata Motors has supplied a total of 618 e-buses that have run approximately 20 million kilometres to date. At the moment, Tata’s electric buses have a range of over 100 kilometres which it plans to ramp up to between 140 kilometres and 200 kilometres. In M&HCV, for predictable routes and low-range applications such as municipality applications, battery electric will make sense according to the company. But, for the long haul, where tonnage remains high, it electric currently doesn’t offer adequate options for truck operators.

Over the next few months, Tata will also turn its attention to LNG-powered trucks in addition to hydrogen as a fuel as it seeks to reduce its dependence on fossil fuels. Much of that of course is because, once the company ramps up its CNG offering, the power to a large extent becomes amenable for LNG. That means the company will only have to work fuel storage and delivery system for LNG in addition to exploring avenues in using hydrogen as a fuel. 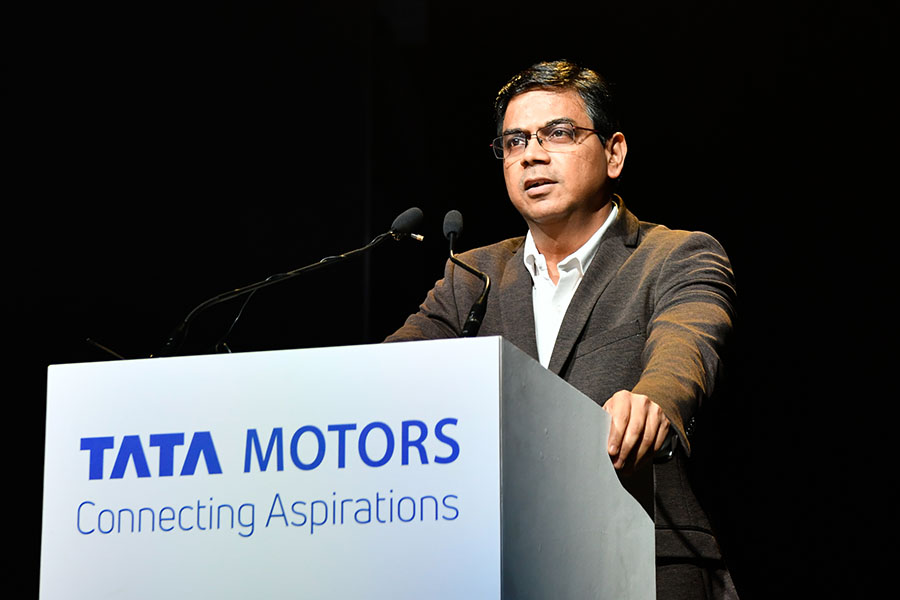 In February this year, the Indian government had announced a national green hydrogen policy, aimed at boosting the domestic production of green hydrogen to five million tonnes by 2030 and making India an export hub for the clean fuel.

““Hydrogen as a fuel seems to be a very interesting and attractive area,” Wagh says. “Of course, the cost of hydrogen generation and transportation has to go down. But it appears that there will be a lot of investment happening in that. And then hydrogen can find its way into commercial vehicles through two technologies. One is a hydrogen internal combustion engine. That way you can blend hydrogen into CNG or hydrogen itself as a fuel, which is close to zero-emission, or use hydrogen for fuel cell electric vehicles. So it appears that these technologies will be there in commercial vehicles and therefore, we are, preparing ourselves for each of these technologies.”

“Sustainability is now at the core of every business,” adds Gupta. “Stricter emission norms are already in place and Tatas have been consolidating themselves to be on the top of every new technology available. They are also aggressive in their approach to customers and that means, they will continue to be at the top of the game going forward.”

The transition to cleaner fuels also means that the automaker is now focussing on ensuring commonality across its platforms, something akin what Tata Motors passenger vehicles had done in the past to reduce costs.

“We’ve tried to have a very high level of modularity and commonality amongst our platforms and some of the other aggregates and modules,” Wagh says. “They will remain common irrespective of the fuel. But on the power train, fuel storage and delivery, we will create that flexibility and also keep on investing in the development of each of these fuel options so that we are ready for whichever fuel becomes more important.”

Also read: Tata Motors is on a roll. Can anything stop it?

About a decade ago, Tata Motors cornered around 55 percent of the commercial vehicle segment, a number which has since fallen to about 45 percent and Tata reckons that a focus on profitable growth will also play a significant role in winning back the market. In the passenger vehicle business, the company has scripted a fairy-tale turnaround, having doubled its market share in a span of two years.

“We have a clear objective of growing profitably,” Wagh says. “We will have a product portfolio, which is superior on some of the most important attributes to the customer. Then there is the first-to-the-market kind of introductions like we’ve done in the CNG space or the safety today. We will also be focussing on some validated service offerings, like uptime assurance or fuel efficiency management program.”

Yet the commercial vehicle industry, unlike passenger vehicle businesses, is a segment where costs continue to dictate purchases. That’s precisely why Wagh believes that any technology that the automaker introduces should have an equivalent advantage on TCO [total cost of ownership] to the customer. That could be by way of TCO advantage or a faster turnaround time that could lead to higher revenue potential.

That means, the bus and heavy commercial segment is now witnessing a fast paced growth with many state transport undertakings too placing significant orders. “While mobility per person may be at a lower level, mobility will be there,” Wagh adds. “And for a populous country like ours, passenger mobility requirements will continue to grow and therefore buses as a sector will grow. And in addition to that, with the government’s intent to move toward electric transportation is also going to open up a completely new opportunity for all the OEMs.”