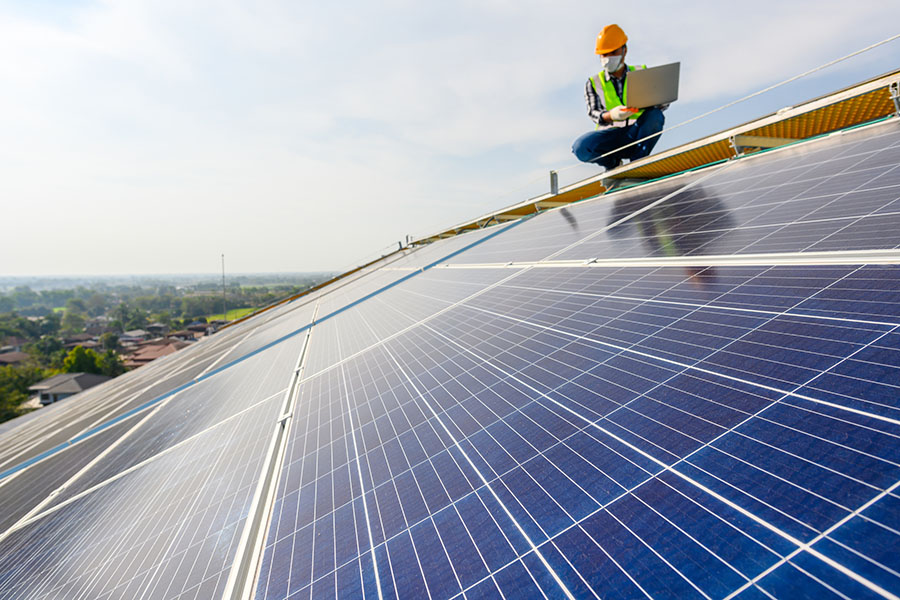 An emerging trend is ‘open access’ power wherein the developers set up the installations, connect them to the grid, and strike power purchase agreements with large enterprise customers
Image: Shutterstock

Even as India falls behind on its 2022 target of power generation from renewable sources, there is growing interest among developers and investors in the country’s decarbonisation market.

The two companies have signed binding agreements under which OTPPB will acquire a 30 percent equity stake in Mahindra Susten Private Limited—the Indian conglomerate’s renewable energy business—at an equity value of Rs 2,371 crore (about $300 million). The proposed transaction also envisages the setting up of an Infrastructure Investment Trust (InvIT), comprising renewable power assets seeded by Mahindra Susten with operational capacity of around 1.54 GWp (Gigawatt-peak).

This transaction will help Mahindra Susten build a strong renewable energy business focussed on solar energy, hybrid energy, integrated energy storage and round-the-clock green energy plants, the company said. The deal will “unlock value in the renewable energy sector with continued joint investments towards accelerated growth,” said Puneet Renjhen, member of group executive board and EVP, Partnerships and Alliances at Mahindra, in the release. Mahindra aims to be carbon neutral by 2040.

“The deal is a sign that they are now more bullish about the renewables space,” says Shravan Shankar, co-founder of Climake, a climate finance intelligence provider. “Last year they were one of the top developers in terms of installations in the country, and it’s fair to say that there’s been a big push from them with a lot more focus.”

The new structure in partnership with the Canadian pension fund also makes it easier for global investors to back their projects. The move shows they feel there’s a lot more scope for them to win business and scale their operations. And now investors will also be more bullish about joining in, he says.

Apart from Mahindra Susten, companies like Tata Power and SunSource Energy have raised money to expand operations. This level of capital raise wasn’t there in previous years, Shankar says, from which one might infer that there will be an acceleration in the renewables space in India.

One way in which developers operate is by building large solar installations and connecting them to the existing power grids in the country. Then they rely on distribution companies, or ‘discoms’, to get paid for the power they supply.

An emerging trend is called ‘open access’ power. Here, the developers set up the installations and connect them to the grid, and strike power purchase agreements with large enterprise customers instead of relying on discoms. For example, Adobe India, the Indian 0unit of creative software maker Adobe, gets 100 percent of its power requirement for its Bengaluru facility from solar farms in Karnataka operated by CleanMax Enviro Energy Solutions, according to CleanMax’s website.

The open access route, which has been around for a while but has picked up in recent years, also helps solve problems of not having enough roof-top space or other real estate for a company to set up solar power installation for its needs.

As to India’s renewable energy market, developers as well as investors could be sensing an opportunity due to multiple reasons. For one, “we are well behind our renewable energy target for 2022, which is 100 GW [for solar], and we’re only at about 60 GW,” Shankar points out.

India will miss its renewable energy target of generating 175 GW of green energy by the end of 2022, The New Indian Express reported on August 7, citing a senior government official with the Ministry of New and Renewable Energy and a government report on wind energy. The delays are due to the impact of the Covid-19 pandemic, and the disruption of Chinese supply chains, according to a Parliamentary standing report on ‘Evaluation of wind energy in India’, tabled in Parliament in August, according to the newspaper. The deadline has been pushed by a few months, with delays in achieving targets for both solar and wind power, according to government data, the newspaper added.

The 175 GW of renewable energy capacity, as per promises made by the Indian government in 2015, includes 100 GW from solar, 60 GW from wind, 10 GW from biomass, and the remaining 5 GW from small hydropower. Official data shows 57.71 GW of solar power and 40.71 GW of wind energy have been installed till June 2022, according to The New Indian Express report.

Also read: COP26: Will India commit to or cop-out of climate obligations?

India is the world’s third-largest producer and second-largest consumer of electricity, with an installed power capacity of close to 400 GW. The Central Electricity Authority (CEA) of India estimates the country’s power requirement to more than double by 2030, to 817 GW. The government aims to have 500 GW of that coming from renewable energy sources.

As of March 2022, the CEA estimated coal-fired power plants’ capacity to be 216 GW. By March 2030, its projections show installed capacity of 267 GW. Therefore, India’s installed capacity of coal-based power will actually go up between now and 2030, even though as a proportion of overall capacity it may be lower.

Shankar of Climake says that developers and investors could be expecting the government to make another push to boost renewables. In this year’s Budget, $3 billion in government subsidies were earmarked especially for domestic players to boost manufacturing of solar modules, which should reduce costs to boost installations, he points out.

According to India’s updated climate plan, approved by the government this August, the country is committed to reducing the emissions intensity of its GDP by 45 percent by 2030 from its 2005 levels, and achieve about 50 percent cumulative electric power installed capacity from non-fossil-fuel-based energy resources by 2030. India’s long-term goal is to reach net-zero carbon emissions by 2070.

Chris Ireland, senior managing director, greenfield investments and renewables, infrastructure and natural resources at OTPPB, added in the Mahindra press release: “We believe the renewable energy sector in India is poised for significant growth in the coming years, as India works towards its ambitious clean energy goals.”