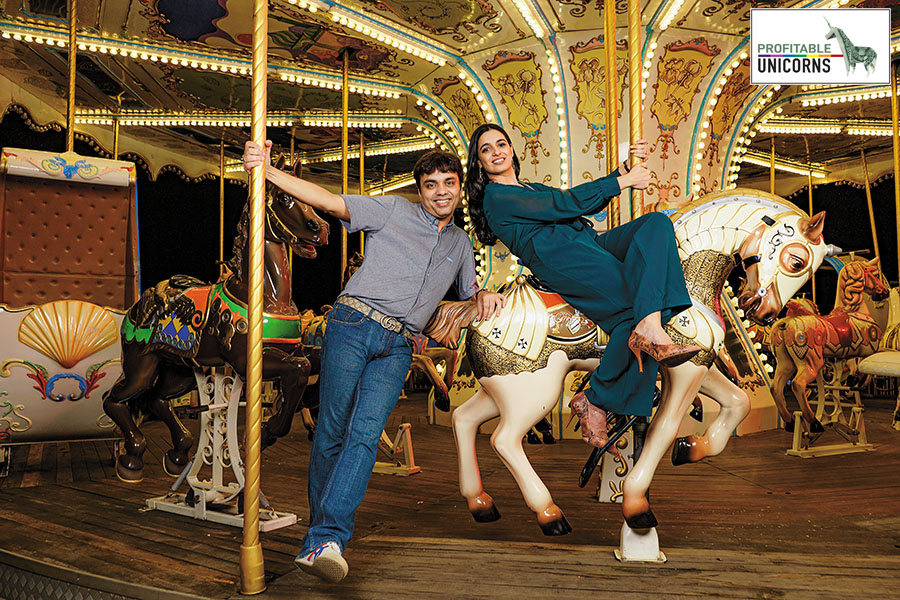 Sector 26, MG Road, Gurugram. This was the first masterclass of the year. On a drenched Tuesday afternoon in August, 50-odd people cram into a dull conference room. There is no visual relief, white walls stare into your face, and over two dozen black chairs are placed around a long horseshoe-shaped table. The unostentatious corporate office of OFB Tech is hosting two bright speakers for their half-yearly motivational session for budding entrepreneurs and the ones slogging in the corporate world.

The first presenter completed his mechanical engineering from IIT-Kharagpur, finished his MBA from the Indian School of Business (ISB), and then spent a little over four years with venture capital (VC) fund Matrix Partners. In August 2015, he left the VC world and took a leap of faith by starting a venture that got funded by SoftBank. The pedigree of the 41-year-old and his inspirational journey make him a great catch to stimulate the young audience.

The second speaker has an equally impressive track record. She completed her BTech from IIT-Delhi, went to ISB for her MBA and worked with McKinsey in Mumbai for close to nine years. In 2015, she started her own venture, which grew at a blistering pace and managed to get the backing of marquee investors such as Alpha Wave Global, Tiger Global, Norwest Venture Partners and Creation Investments. The accomplishment of the 39-year-old founder and chief executive officer has fast become the talk of the town. 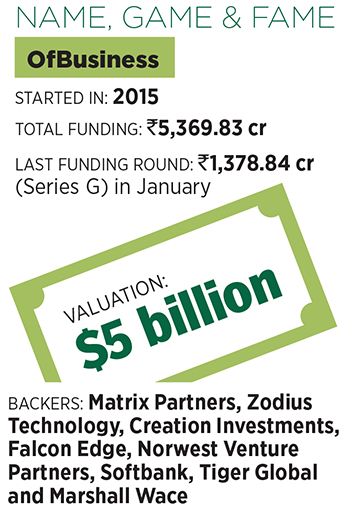 As the participants settle down, Asish Mohapatra starts the session on ‘Finding Happiness’. “Let me start with a quick disclaimer,” the guru underlines. “I am not going to talk about the ‘Open Happiness’ campaign of Coca-Cola,” he says. The crowd erupts into laughter. “Today I will talk about four forms of happiness that entrepreneurs must strive for,” he underlines. “Happiness starts when your venture posts its maiden profit. That’s the beginning of happiness,” he says. The second stage comes when it keeps growing the profit. “This is real happiness,” he stresses. The onlookers are amused with the nuanced definition.

Mohapatra now tries to make the lecture engaging. “What comes after happiness?” he throws the question at the audience. “Is it more happiness?” shouts a viewer standing near the the door. “No, my dear friend,” says Mohapatra. What comes after happiness, he explains, is delight. “And delight is when people look at your P&L and exclaim ‘Arey wah, mazaa aa gaya (Wow! It’s great),” he says with a smile. What every founder must strive for is the last stage. “It’s ‘aha’. And it comes when your business ticks three boxes,” he says. The first is that the venture needs to grow continuously. Second is profit must become meaty. And last is nobody else can copy what you are building. This is ‘aha’. “In general, anybody who doesn’t make money should shut down very soon,” he maintains. The crowd bursts into rapturous laughter. 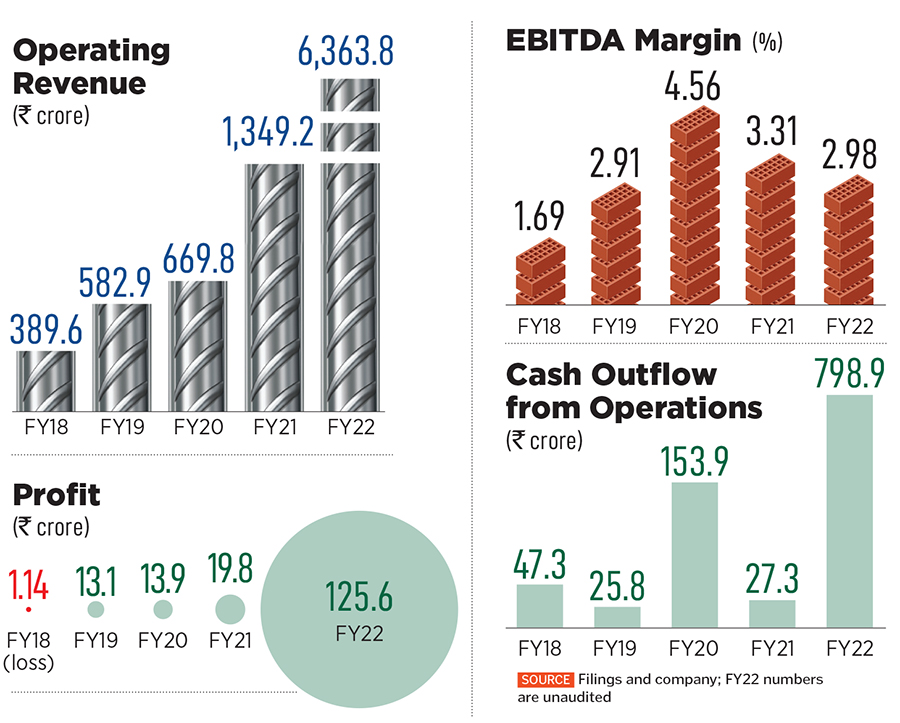 Now it’s the turn of Ruchi Kalra to start her tutorial. “What’s the difference between a good VC/PE and a not-so-good one?” she asks. The former will start the conversation with return on investment, and the latter will be upfront about growth orientation. The billion-dollar trap that founders need to stay away from, she lets on, is not to get into a profit versus growth debate or a trade-off. “Profit has to coexist with growth,” she says. 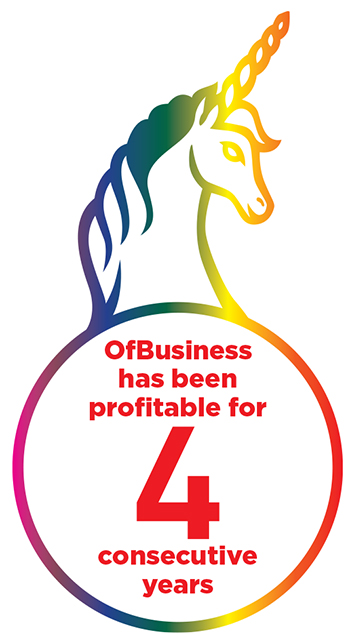 The former McKinsey honcho points out three business components that work in tandem. First comes growth. It is followed by profitability. And the third crucial part is health. The health of a business, she points out, means that the venture meets all compliance norms, and follows the rules and laws of the land. India is not an easy place to do business. “So always keep a sharp eye on costs,” she advises.

The students grasp lessons in business fundamentals, the session ends, and the speakers now talk about their ventures, mutual chemistry and unicorns. “She gets restless if there is a loss,” laughs Mohapatra, co-founder and chief executive officer of OfBusiness, a B2B ecommerce platform which provides full-stack solutions spanning raw material procurement, working capital financing and revenue growth opportunities in a bunch of sectors, including manufacturing and infrastructure.

Also read: 3 Ps of profitability: How to bring Indian startup unicorns into the black

Co-founded in 2015 by the husband-wife duo of Mohapatra and Kalra, along with Bhuvan Gupta, Nitin Jain and Vasant Sridhar, OfBusiness is valued at $5 billion and closed FY22 with an operating revenue of ₹6,363.83 crore—an around five-fold jump from ₹1,349 crore posted in FY21. The venture has posted four consecutive years of profit. In fact, the numbers leapfrogged from ₹19.76 crore in FY21 to ₹125.63 crore in FY22. “She can’t sleep even if a single transaction makes a loss,” adds Mohapatra.

Kalra now talks about how the couple has managed to find common ground. “I’m very health-oriented. He is very growth-oriented. But both are very profit-oriented,” smiles the co-founder and chief executive officer of Oxyzo, a financial services and lending arm of OfBusiness. Started in 2016, Oxyzo raised its maiden external funding round of ₹1,527.19 crore in March at a valuation of $1 billion. While the company had a sedate start—an operating revenue of ₹3.7 crore in FY18—it quickly jumped to ₹311 crore in FY22. Interestingly, Oxyzo—the word is a combination of oxygen and ozone—has always been profitable: Five consecutive years of profitability. The startup claims to serve over 3,000 SMEs across India, and has ₹3,000 crore as AUM (assets under management). 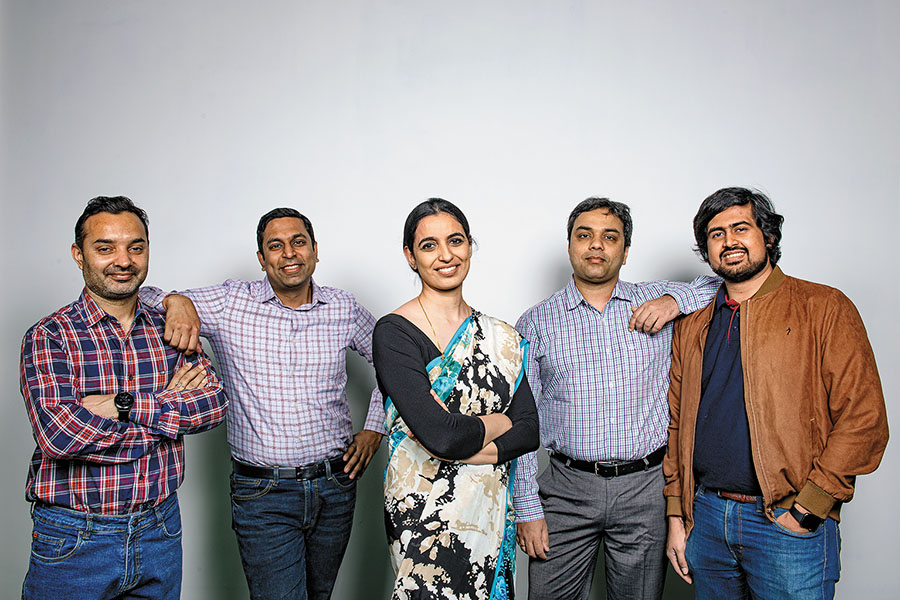 Mohapatra, who was once a funder before donning the founder’s hat, explains how the mind of a VC works. He starts with a brutally candid statement. “A VC does not come for profit. They prefer if a venture is loss-making,” he reckons, explaining the method behind the apparent madness. The promise of future profit is the key. If the business is negative and can turn positive in the future, then the delta is very high. “Hence VCs play on this high delta,” he says, adding that he doesn’t rate himself as a great investor. The reason is simple. Mohapatra always wanted to run the company he invested in, which obviously doesn’t work. “You have to bet on the person who’s the smartest in the room. And it’s not you,” he says with a laugh.

Back in 2015, when OfBusiness started its journey, Mohapatra encountered too many smart people with loads of money and gyan. Once, during a funding pitch, he declared his noble intention of making a profit on every transaction to a ‘hallowed VC’. The reaction was unexpected. “Chhoti baatein mat karo (Don’t talk small),” came the sharp and unequivocal feedback. ‘Think big, raise more, burn and grow’ was the suggestion. When, in FY18, OfBusiness posted a loss of ₹1.14 crore, Mohapatra got loads of consolation. “Don’t worry. Your business has potential,” he was told. The entrepreneur was not bemused. “If you make profit, then only you have potential,” he told his team. 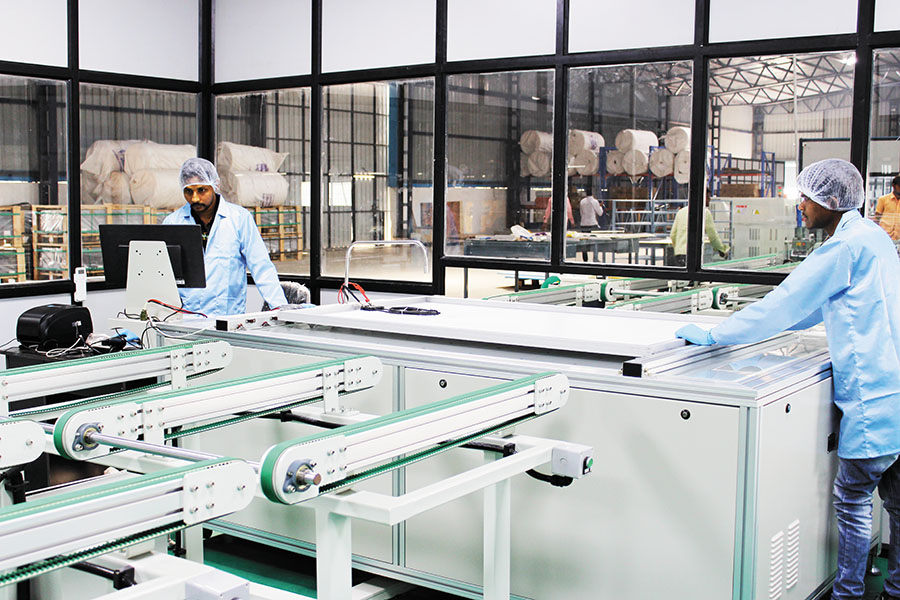 Call it ‘middle-class’ conditioning or the values which inadvertently get ingrained by observing one’s parents, Mohapatra was always influenced by his mother. A physics professor in Odisha, she religiously used to save some money towards the end of every month. “That was profit for her. That’s how we learnt,” he says. Kalra points towards another learning during the formative years of OfBusiness. “In 2016, our funding pitch got rejected 73 times,” she says with a smile. The co-founders didn’t lose heart. “We just wanted one guy who would understand our vision,” she says. 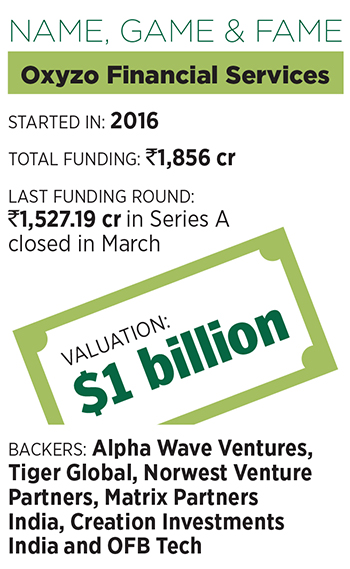 Eventually, there was one guy who understood the vision. But he declined to fund in 2018. “Back then, OfBusiness was not profitable,” recalls Niren Shah, managing director at Norwest India. The VC presented his case. “If you are not profitable,” he told Mohapatra, “you don’t get a better credit rating.” What this means is that your cost of debt does not come down, which again means you can’t actually grow. The entrepreneur understood what the VC was trying to impress upon him. “I am very profit-focussed and working on it,” was the assurance.

After four months, Mohapatra went back to Shah. “Now my venture is profitable. Let’s do a round,” he said. “That’s Asish for you,” smiles Shah. In 2019, Norwest led a ₹250 crore Series D round of funding in OfBusiness. “He has a very strong understanding of whatever he does, and a very tall vision about what he’s going after,” says Shah. “Asish understands that sustainability and scalability comes from being profitable,” he says. Commenting on the dynamics of Mohapatra and Kalra, he reckons that it’s rare to have a husband-wife combo which is so tuned to profitable growth. “If Asish is going for the reward, Ruchi will look at the risk,” he says, adding that the growth of Oxyzo under her leadership has been amazing.

Meanwhile, in Gurugram, what the power couple find amazing is growth without profit. “Nobody eventually makes money. The work has to start immediately,” says Mohapatra.

What the entrepreneur finds equally astounding is a long list of vanity metrics used to justify walking on the road to profitability. “There is no such road. Business is done on ‘what is’ and not ‘what if’,” he says. All the jargon—gross margin profitability, contribution margin profitability et al—just hides the reality that the business is not serious enough to post profit. 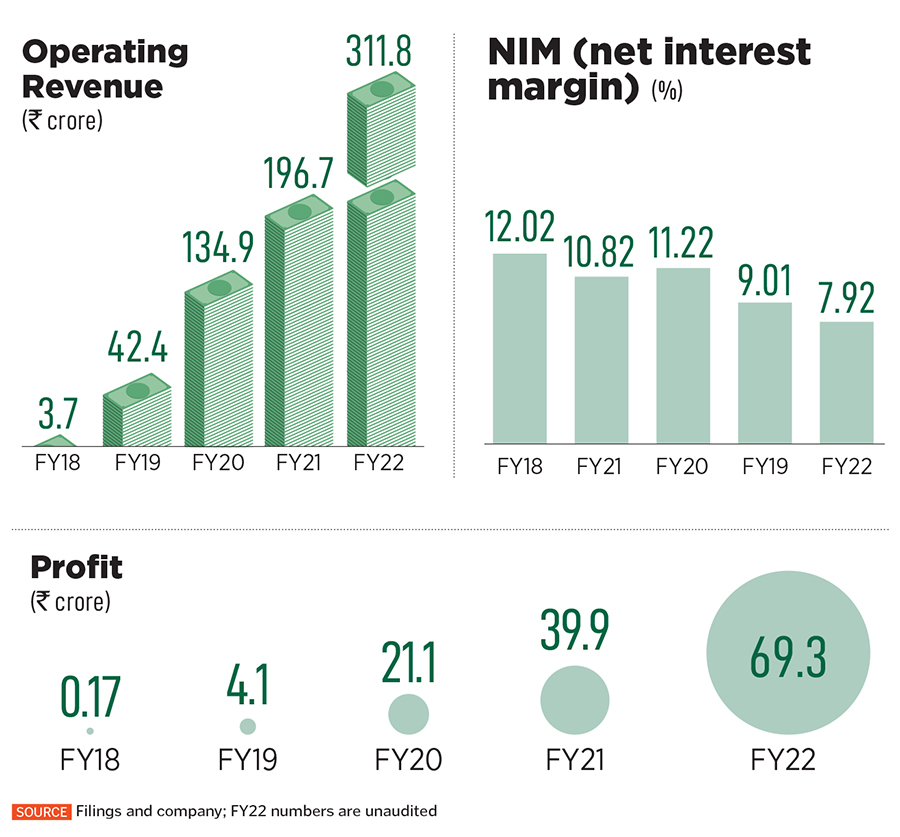 But is he happy with his size of profit? After all, a company with a revenue of over ₹6,000 crore should have more to show than ₹125 crore as profit. Right? Mohapatra explains the low margin. “Our business is about thin margins with high cycles,” he says, adding that the company rotates capital 14 times a year. “So you make 14 times your PAT as return on capital. This can be seen in the money raised (40 percent of which is in the bank) to make a business of this scale,” he adds. As OfBusiness ventures into more segments, he contends, the numbers are expected to significantly improve. “We are just experiencing real happiness. Delight and aha are yet to come,” he signs off.

(This story appears in the 23 September, 2022 issue of Forbes India. To visit our Archives, click here.)