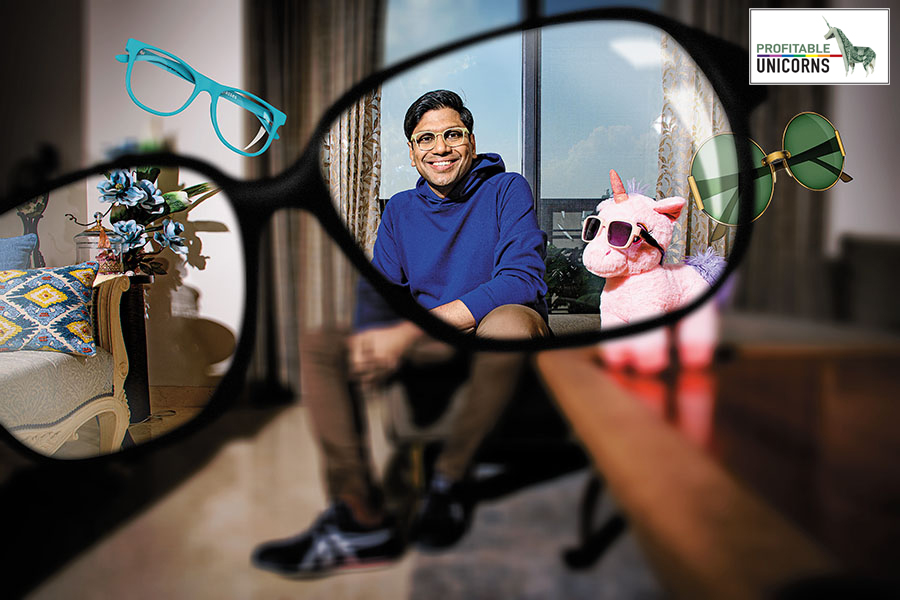 Bengaluru, 2011. “Kitna paisa chahiye (how much money do you want)?” was the pointed question. IDG Ventures (now Chiratae Ventures) saw immense value in Valyoo Technologies. Co-founded by Peyush Bansal, Sumeet Kapahi, Amit Chaudhary and Neha Bansal in 2008, the Delhi-based ecommerce firm rolled out Lenskart in November 2010 and started selling contact lenses. Over the next few months, Lenskart gradually dabbled into spectacles and sunglasses, the bootstrapped business gathered steam, and the co-founders who started Flyrr—an online store to sell spectacles, sunglasses and contact lenses in the US in 2009—were now set to get their first VC (venture capital) cheque.

The excitement, understandably, was palpable. After finishing his engineering from McGill University in Canada, Bansal joined Microsoft in the US and worked for close to a year. The truncated stint was the first turning point. “Microsoft was all about ushering in revolution and consumer obsession,” recalls the 38-year-old co-founder and group chief executive of Lenskart, which has raised around $1 billion in funding so far and is valued at $4.3 billion. “Kuch disruptive karna tha (I wanted to do something disruptive),” he adds. The wannabe entrepreneur came back to India in November 2007, invested ₹25 lakh and started SearchMyCampus, an online classified for students scouting for jobs, accommodation and rentals, from the basement of his parents’ house in South Delhi in January 2008.

Over a year later came the first learning. There was not much money to be made. The rookie founder didn’t give up, adjusted his focus and came up with another gig. In June 2009, Flyrr was started, and it took off. By mid-2010, the venture catering to the US market was making around $100,000 a month. The success, though, was shortlived. The suppliers in the US were not customer-centric, didn’t pay heed to user issues, and complaints started piling up. Bansal dashed to America, spent three months in futility, and realised that Flyrr didn’t have any control over operations and delivery. “What if the model could be replicated in India?” he asked. The answer from his team was a resounding yes, and Lenskart was rolled out in November 2010. 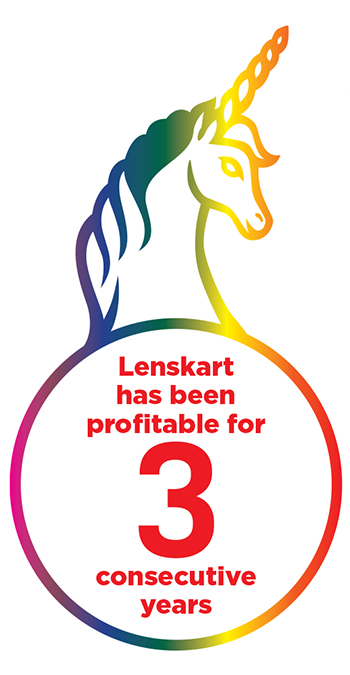 The initial challenge was to sell lenses and glasses online. “Would there be buyers?’ was the big question staring at Bansal, who took two steps to nudge users. First, he rolled out a 14-day ‘no questions asked’ return policy, which was later extended to a year. And the second was to set up a dedicated call centre to address consumer grievances. The gambit worked, the business scaled and it caught the attention of IDG, which had invested in fashion ecommerce venture Myntra in 2008.

In Bengaluru, in early 2011, IDG was quick to spot another hidden gem. The compelling proposition to invest in Lenskart was simple. Titan Eye Plus, an eyewear company started by the Tata group in 2007, had scaled operations. Lenskart, IDG argued, could be bigger than its rival because of the online reach. The VCs were ready to cut a cheque. “I think we need ₹1-2 crore,” said Bansal, sharing his estimate of funding requirement. The backers proposed $4 million (around ₹22 crore), the term sheet was offered, and the deal was sealed.

The money, though, came with a rider. “Ab aap khaali chasme nahin bechogey… aap bags, watches and jewellery bhi bechogey (now you won’t be selling only glasses. You need to add bags, watches and jewellery),” was the mandate from the VC. The idea was to do what Titan was doing. Bansal liked the idea, and started Bagskart, JewelsKart and WatchKart within six months. The tactic worked. With a mix of own labels as well as other Indian and foreign brands, all the new sites posted brisk sales. From ₹30 lakh, revenue leapfrogged to ₹10 crore by 2013. Lenskart’s contribution, though, stayed low at ₹2 crore. But there was a bright side. While all the new ventures posted heady sales, they were in losses. Lenskart, interestingly, was immensely profitable: Around ₹1 crore on sales of ₹2 crore. 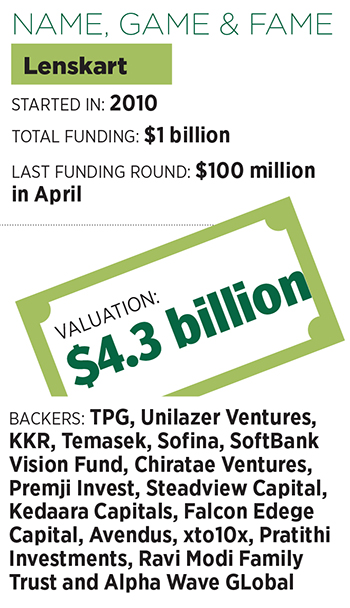 Bansal was in a fix. Though his heart was with Lenskart, he couldn’t think of scaling down his other ventures. They were growing in topline, most of the backers liked the speedy growth, and any thought of putting an abrupt end would have looked repulsive. Enter Ronnie Screwvala. The media mogul, who started UTV Group in the 90s and sold it to Walt Disney Company in 2012, had invested in Valyoo in December 2012. The mentor now invited Bansal for a breakfast meeting in Mumbai.

It was January 2013. The disciple reached much before the scheduled time. “It was Sunday and there was negligible traffic,” recalls Bansal, who was used to brain-storming sessions with Screwvala. The topics, however, never revolved around funding or valuation. It was always about consumers and user insights. This time, though, Screwvala picked up an intriguing subject. “Tum kya banana chahte ho (what do you intend to make)?” asked the guru as he offered a cup of tea. Bansal was elated with an easy question. “I want to revolutionise eyewear in the world,” he replied. “Okay, if that be the case, why don’t you sharply focus on Lenskart and shut down all other ventures?” questioned Screwvala.

Bansal went mute for a few seconds. Then he opened up. “If I do so, nobody will fund me,” he shared his apprehension. “Don’t worry. If you shut them down, I will put more money in the venture,” Screwvala said without batting an eye. “And you won’t have to take a haircut. It would be at the same valuation,” he reassured. Bansal took the offer, IDG too joined hands, and Valyoo got funded in February 2013.

Almost a decade later, Screwvala talks about the incident, and the moral. “If you really want to build a valuable enterprise, one of the key things is focus,” he reckons. Back in 2011, jewellery, bags and watches were a crowded space. With Lenskart, he maintains, Bansal had a bright chance of making a massive impact because it was an uncluttered space. “A 100 percent focus would have given him 100x output,” he says. With multiple projects, even a 25 percent focus would have not given 25x returns. “It would have been 2.5x,” he underlines. Entrepreneurs, he lets on, reach the glass ceiling very easily. But then they don’t smash it. They diversify, and get distracted. “Had Peyush continued with four things, he would have nothing to count,” he says, praising Bansal for taking a leap of faith. “I only recommended. He did it, and it has done wonders,” he says. 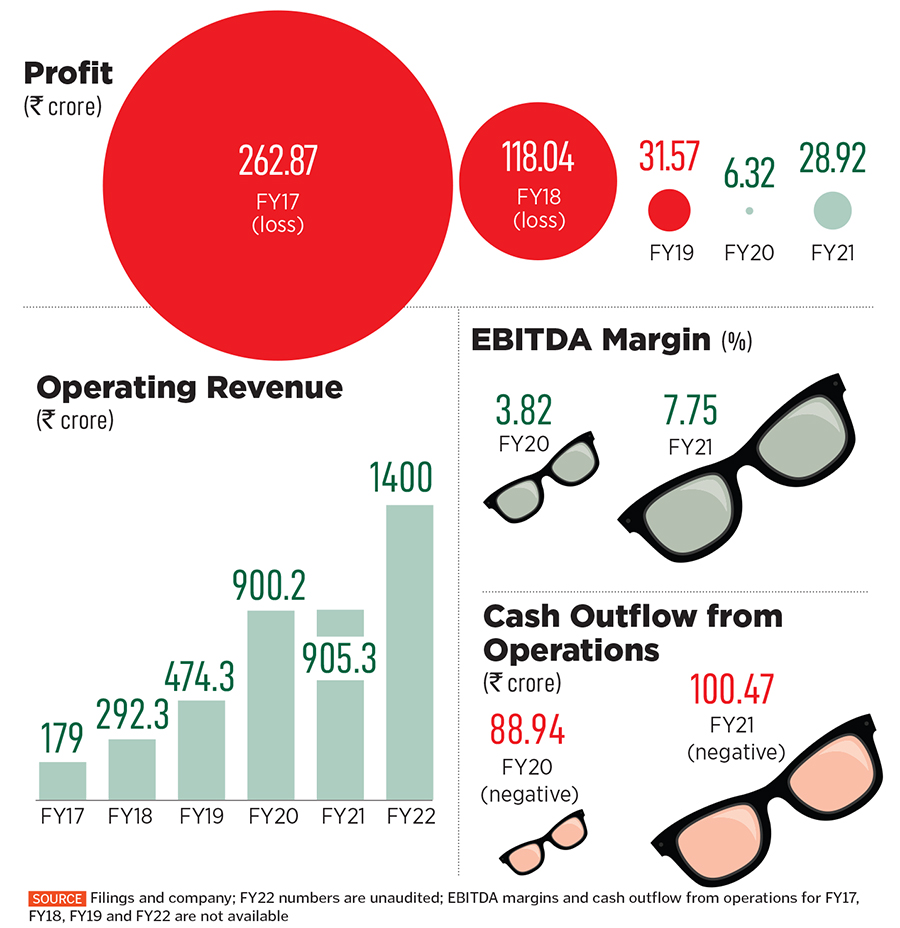 “After that, we never looked back. We kept growing,” says Bansal, who points towards the rapid progress of the company since FY17, a year when losses eclipsed operating revenue: ₹262.87 versus ₹179 crore. The tipping point came after a fiscal. The numbers flipped. While operating revenue for FY18 had a sedate growth at ₹292.35 crore, the loss drastically came down to ₹118.04 crore.

Also read: Meet all the 42 unicorns born in 2021, the highest ever for any year

Apart from a sharp focus on business, what helped Lenskart grow aggressively was its drive to continuously strive for improving conversion rate, cut costs and ramping backward integration. While starting home services and free trial were lynchpin in the strategy to drive volumes, and consequently erase losses, progressively cutting costs helped it keep expenses under control. Next the company ventured offline, opened physical stores, expanded franchisees and cemented its bonding with the consumers. From FY19, the revenue juggernaut gathered steam, conversion increased and bleeding sequentially slowed down.

In December 2019, Lenskart entered the unicorn club when it reportedly raised around $231 million in a Series G funding round led by Japanese financial conglomerate SoftBank. In FY20, over a decade after starting the venture, Bansal posted the firm’s maiden profit. The next fiscal, the unicorn remained profitable, and the trend continued in FY22 as well. “We are profitable. Now the business is at 69 percent gross margin, and we never achieved this number by increasing the price,” claims Bansal. Though he declines to share profit data for FY22, he contends that the company posted an operating revenue of ₹1,400 crore, a healthy jump from ₹905.3 crore in FY21. “Our current Ebitda run rate is ₹20 crore a month,” he claims.

In spite of strong growth, Lenskart has had a fair share of blurry episodes. Bansal points out a few of them. The first was not spending enough time on containing costs. Call it the curse of a high-margin business, a strong culture of questioning every penny spent was never built. The result was an ever-rising cost. “Overheads kept increasing, and the phase lasted for a few years,” says Bansal. The company slipped into a trap. Small leaks and at times overlapping expenses at multiple points started posing inconspicuous threat. 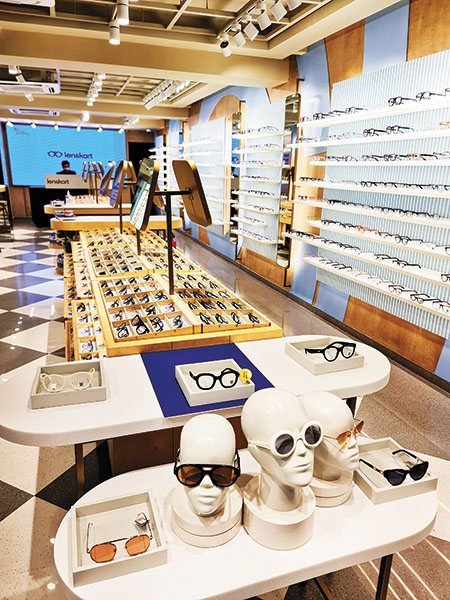 Lenskart has also ventured offline to cement its bond with consumers. The impact showed since FY19 when revenue and conversion picked up

The co-founder points out another mistake. “I was always customer-obsessed but not employee-obsessed. It was a big mistake,” he confesses. The trend of hiring a lot of external talent also perpetuated another associated evil. Lenskart inadvertently started aping big companies from where it was getting fresh hires. “Our strength was not what other companies were. We started playing their game,” he says. The move also led to the tampering of the DNA of Lenskart. Promoting homegrown employees took a back seat and paying special attention to the ones coming from outside was given high priority. “That was again a mistake,” he adds.

What, though, helped Bansal in getting back his focus was a priceless advice. In one of the founders’ meet organised by venture capital fund Sequoia, the Indian entrepreneur bumped into Tony Hsieh. The chief executive of Zappos, who turned the company into a billion-dollar internet shoe store, shared a golden nugget with Bansal. “Forget all the numbers. Just focus on EPO (earnings per order),” he said. If a company is not making $10 on an order, it can never post profit. “It got imprinted in my mind,” says Bansal, adding that he always wanted Lenskart to become a ‘pull’ rather than a ‘push’ brand. “If your business is based on pull, and is 10x better than the others, there is no reason why it should not be profitable,” he contends.

Ask him his biggest fear and challenge, and the gritty entrepreneur gives a peek into his mind. “I hate living on the edge,” he says. The company, he explains, must have a meaty profit so that any major investment doesn’t push it into the loss zone. Whenever Lenskart goes public, he underlines, the bottom line won’t be slender but muscular. “We don’t want to be a ‘just profitable’ business,” he says. “We want to be ‘a well-profitable business,” he smiles.